The Fed’s brilliant stimulus plans includes raising the conforming loan amount from $417k to upwards of over $700k depending on the area. Great, so the government’s idea to solve this massive credit crisis for its nation of debtors is to further encourage consumer spending and debt! The American people are swimming in debt and they certainly don’t need more of it. There is an affordability issue here and someone needs to tell the folks in Washington D.C. that we need LOWER housing prices, not higher ones.

According to HousingTracker.net, the folks in Los Angeles County spent 30% of their income on their mortgage payment in 1997 and that number grew to a whopping 63% by 2007! Most financial advisors don’t recommend spending more than 35% of one’s income on housing (buy or rent). 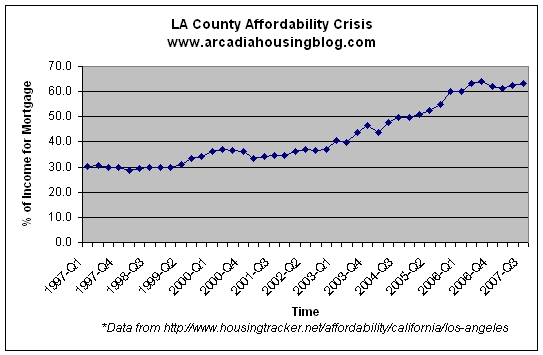 To be conservative, one should buy a house priced at no more than 3 to 4 times their annual income. Ratios from 2.5X to 4X income is considered affordable, 4X to 5X income presents an affordability problem, 5X to 6X income is very unaffordable and 7X+ is financial ruin. Over the past few years, this ratio has been on the rise at an unsustainable rate from 4.4 all the way up to over 10! 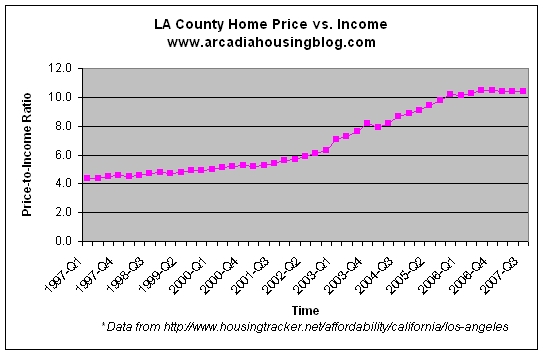 The data for Arcadia is not much different than that for all of LA county. Actually, it’s worse because the price-to-income ratio for Arcadia starts at 5.1 in 1999 and increases to over 11 by 2007. Can you imagine buying a house that costs over 11 times your annual income? Anyone who says prices are not going to come down and that the market is going to “rebound” anytime soon is a liar. Without a substantial increase in income, home prices are destined to decline back to sustainable values. 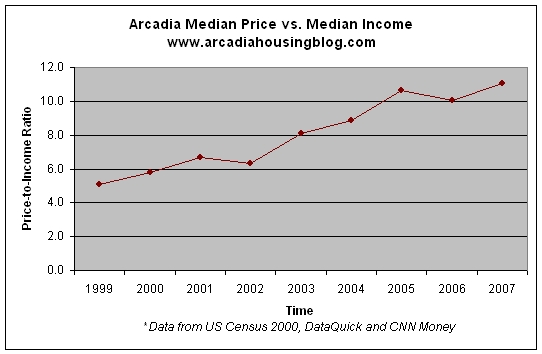 It seems that there’s a lot data out there for LA County, but not much specifically on Arcadia. In the coming months, I plan to do more in-depth analyses on fundamental values, affordability and other measures of the market so if anyone has Arcadia specific data on median home prices and incomes for the past 10-20 years, I would appreciate it if you shared that with me.

So with that in mind, where do you think we are now? Denial, Fear, Depression, Panic, Capitulation or Desperation? 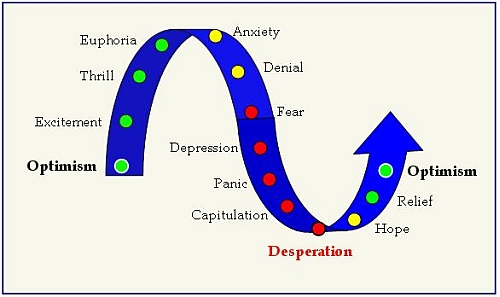 Submit your vote for the poll on the right sidebar.

3 thoughts on “A Serious Affordability Issue”