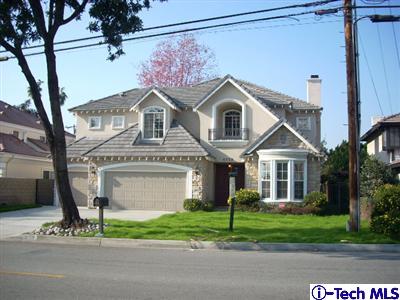 Here’s another McMansion up for sale. I can’t imagine why anyone would like the look of a house that’s way overbuilt on its lot. The dominating three car garage at the front of the house is so 1980s. According to one of our readers, McMansions are “gaudy” and I agree. The sales history of this property tells yet another story of gambling on a McMansion. Perhaps these folks should have went to the Golden Nugget in Vegas instead of Golden West in Arcadia; they’ll have better odds with their money playing at the tables.

This stretch of Golden West Avenue used to be quiet, but ever since the 99 Ranch Market plaza popped up in the 90s, traffic has increased substantially. This is within walking distance to the aforementioned strip mall in addition to the Pavilions town center next to it. I often see supermarket shopping carts wander down towards the location around this house making the neighborhood look tacky. In addition, it borders the neighboring town of Temple City so it’s not prime Arcadia real estate by any means.

As IR would say over at Irvinehousingblog, this is a “rollback” to 2005 prices. From the looks of it, the buyer in 2001 bought the property for $240k, plowed it down, built this monstrosity they call a house and sold it 8 months later for $665k. From there, the bubble takes off and wild speculation begins with transactions in 2004 for $985k to upwards of over a million dollars by bubble-mania-euphoria-year 2005. The current seller bought 15 months ago for $1.25MM on pure speculation, but won’t get burned even if he doesn’t get the asking price. Why? Because it was bought with 100% financing.

With zero downpayment, the flipper walks away with nothing but a dinged credit score. In this case, the 2nd mortgage lender will lose $25k if they get their asking price. It’s not pretty either way, but the lenders were stupid to do 100% financing and this should teach them not to do that again.

This property has been on the market for 3 months and it’s likely it will remain unsold without a significant price reduction. If I were to spend around $1.2MM, there are much better choices in more desirable parts of Arcadia such as this in Peacock Village, this and this up in the Highlands.