The nesting instinct is typically characterized by the irrational behaviors of women during and after childbirth. Its symptoms are also common among newly-weds and young couples. This irrationality often entails purchasing a home with or without sound financial prudence. As a woman, I understand that and accept responsibility for the financial and/or emotional trauma our half of the species often cause those of you from Mars.

Instinct is hard to fight because well, it’s instinct. By definition, instinct is passed down to us by our forefathers (or foremothers I suppose) through thousands of years. Do not underestimate Mother Nature; it is a very powerful force. Those of you who are in a relationship may already know that. Don’t let the following happen to you.

While this isn’t an excuse, please try to understand. Women just want to be able to provide a warm, clean, safe and stable home for their children and family. That’s a normal and healthy goal. There’s nothing wrong with it if they don’t go outside of their financial comfort zone to do it.

There’s not a woman on this earth who wouldn’t like a home in a quiet neighborhood to raise her family. Not a single one. The problem arises if they want a monstrous 4000 sq-ft, 5 bed, 4 bath mansion when all they can afford is a 1200sqft 2 bed, 2 bath attached condominium. Unfortunately, some women can’t separate “safe and secure” from buying the biggest house they can get their hands on. Too many times have I seen the men in their lives succumb to their unjustified desires to buy more house than they can afford. The stress that financial instability can cause is often much more than a couple can withstand. I don’t wish that upon anyone. 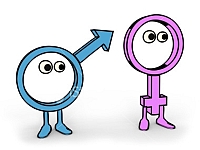 Here is where our other half comes into the picture. Generally speaking, men are more logical than women. Once guys are focused on one thing, their mind is locked in that compartment until that issue is resolved. Women on the other hand think in 3107 tangents – simultaneously. Generally speaking, men are rational problem solvers and women run on emotion. Of course there are exceptions and not all women are irrational, but I’ve seen happen more times than I can count.

A nest to raise the kids could be a comfortable condo or a large rental house. As a kid, I moved around more than you can ever imagine and trust me, kids don’t care whether the house they live in is purchased or leased. They do care if you’re too busy worrying about mortgage payments to play with them. Renting a place doesn’t mean you can’t make a home out of it. Home is eating dinner together as a family, doing crafts with the kids and watching a movie with your wife. You can do those things wherever you live. Buying more house than you can afford is much more financially straining than renting within your means. It’s also less stressful too which could do wonders for family time.

Most men don’t want to deal with the very tiring and emotional battle and just give in buying more home than they can afford. FIGHT THAT INSTINCT. Fight it, but don’t ignore or argue with her. Instead, try to reason with her and show her with realistic numbers why it makes sense to rent (or buy). She will appreciate the fact that you’re sharing your thoughts and working to provide a stable environment for your family.

Have a wonderful weekend.

6 thoughts on “Fight the Nesting Instinct”