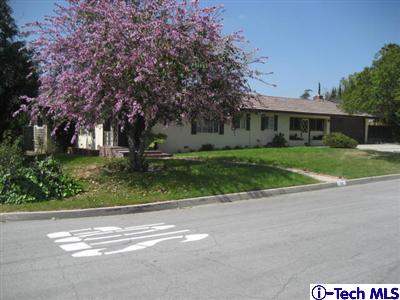 “BANK OWNED REO! A wonderful ranch style home in a fantastic Arcadia locale. This home features a large living room with a cozy fireplace, formal dining room, upgraded bathrooms & laundry room. There is a large bonus room with a wet bar and direct access to home via the attached garage. Large front and back yard. Sold As-Is.”

Today’s property is a $330k+ loss member and serves as another poster child on the consequences of negligent lending. The 100% financing that the homedebtor used to “buy” this home soon caught up to him. The $105k 2nd mortgage is a complete wash and should they get this asking price, the primary loan bag holder will suffer over a 1/4 million dollar loss after 6% commission.

At 10,000sf, you get a decent size lot and a 2,000+ sf living area. Unfortunately, this property is located right at the intersection of 3 streets; Columbia, Balboa and Sunset. There is no escaping the noise in this high traffic cross section.

Taking the 1995 price and applying a 3, 4 and 5% annual appreciation, this property would be worth:

This property listing in the low $700’s is an improvement for a single family home in a good neighborhood. However, there is still no sign of the bottom and prices are likely to drop even further over the next few years. But if you are looking to buy soon and searching for a home or investment properties at bargain prices, consider purchasing a bank owned property.

9 thoughts on “31% Off Peak in Peacock Village”