Are you frustrated about how expensive homes are? Do you feel cheated that people who made $30,000 a year were able to drive that decent $400,000 starter home you’ve been saving up for to over $800,000? Now you’re stuck paying someone else’s mortgage and hoping that you’ll be able to afford a decent condo one day. Are you an Angry Renter?

AngryRenter.com was created to oppose the housing bailout that would reward those homeowners, lenders and builders who got us into this mess. You have probably seen AngeryRenter ads on all the popular housing website: 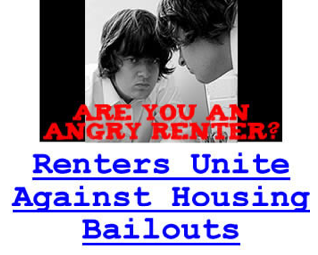 Question: How much could this bailout cost taxpayers?

Answer: According to the latest estimates, if Congress votes on picking up the tab for every homeowner who took out these [exotic] loans, it could cost taxpayers upwards of $120 billion dollars ($120,000,000,000).

I want my tax dollars to go towards public services, education, infrastructure or even pay down our national debt. Why in the world would we want to bailout people who lied about their income, took on exotic mortgages and priced out responsible buyers who worked hard to save a 20% downpayment?

[What are liar loans?]

Liar loans were no doubt the norm in Arcadia between 2004 and 2006. All my residential real estate buddies (now unemployed) made a living selling million dollar homes to households earning less than $100k per year. It absolutely disgusted me and although there are some truly knowledgeable RE agents and lenders out there, the entire industry will be tainted by its actions during the last 4 years.